Step 1: Open a Base Photo in Photoshop

For example: A photo of someone holding a smartphone, I have chosen that as a base photo. And I want to put a tower on top of the smartphone.

Step 2: Copy Screen Part of the Smartphone in a New Layer

Step 3: Insert a Photo to Put on Top of the Smartphone

Here, I have chosen a photo of buildings which I want to put on top of the smartphone. You can insert the photo in three ways::

Go to your image location where you have your saved image. Then, hold & drag the image towards the photoshop application in the taskbar, photoshop will pop up, then release the image there. A new layer will be created. Rename the layer as “Layer 2”.

Method 2: Inserting Image From Other Image Tab in Photoshop

Go to the “File” menu and select the “Open” option. Then, go to your image location and select your image and then click on the “Open” button. Your image will be opened in a new tab in photoshop afterward. Then go to the left side’s tools panel & select the “Move tool”, then click & hold the image & drag it to your existing image’s tab, that tab will pop up and then release the mouse in the image. Your image will be imported in your existing image and a new layer “Layer 2” will be created.

Method 3: Copying Image From Other Image Tab in Photoshop

Step 4: Put the Building Photo Within the Smartphone screen

Step 5: Add a Shadow for the Building 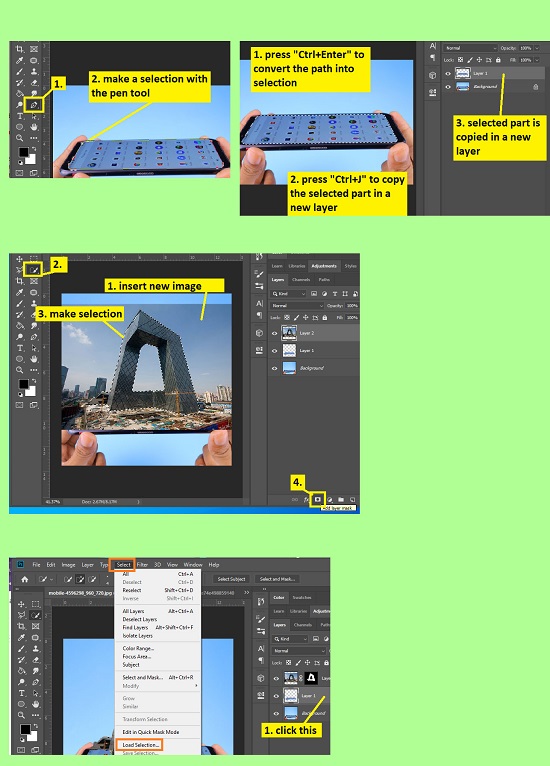